I've been wire working as hard as ever over the last few weeks, but have very little to show for it. Got tons of failed projects all over the craft table. Some of those projects can be revived into new pieces at a later date but half of it has to go into the scrap bin:(

So did I learn anything? I really have no idea - I attempted some new cabachon caging techniques, (the standard type normally done with square wire) and I tried measuring carefully and/or being creative and in the end I had to walk away completely from the cabachon with nothing to show for it and no sense of having achieved anything:( The below picture only shows SOME of my failed caging attempts 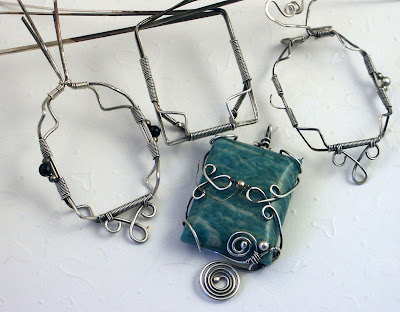 I hated walking away from the learning without having achieved anything except for a feeling of 'ick' - but I was getting no where and it was time to fold that hand of cards.

One reason why so many of my projects are failing in my own eyes is that I want to do better craftmanship. I want to execute everything with excellence. What I love about wire is the way it drapes or folds or wraps when it is handled by a true craftsman. It looks so voluptuous and rich, it draws me in to touch it and be lost in all the yummy folds of it.

Sharilyn Millers work is like that - her technique/craftmanship shows up in such basic things as head pins and eye pins. All her wire has a lovely well-crafted look about it - everything is touchable and voluptuous, full of luxury.

She has started a new blog at http://wirejewelrylessons.blogspot.com/ If you are interested in wire work it is a lovely place to visit. She gives free lessons on the basics and tutorials of cool pieces of jewelry - all free. She lets her cats get into the tutorial pictures if they insist (as cats do) and the vibe on the blog is one of hanging out with the master artist herself in her own house.

It's been great for me to go over some of the basics on her site. I realized that I had picked up some bad habits and it was time for a refresher course in the basics.

I finally got around to working on a necklace that has been on my mind for several weeks. And it just turned into one more disappointment in a long string of them. I loved the design, but the craftmanship just wasn't what I wanted. The excellence just wasn't there. 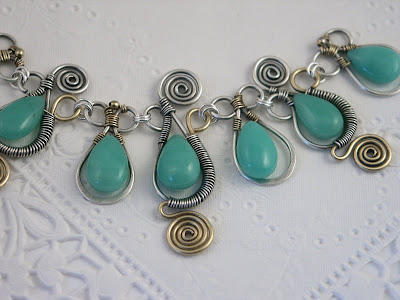 It's really not so bad is it? BUT I knew it didn't have her touch, especially the 'eye' part of the links where the jumprings go through. She would never make a link like that. Hers would have had some lovely roundness to it.

It was a tough project in other ways too- due to the fact that each link needed to be graduated in size to fit the graduated briolettes. Maybe it was a bit too ambitious. I had hoped that using a jig would give me good control over the wire work and uniformity, so when this is what I got using the jig I was pretty stumped as to how to proceed for improvement.

So I'm sitting there in a quandary, wishing I had a teacher who could help me with this link - and I thought "What would Sharilyn Miller do"? And because I have been reading her work lately and reviewing the basics I had some idea of what she might do.

I ended up using a knitting needle mandrel, and rolling down the end of each wire like an eye pin and measuring the amount needed for the eye in the same way she does it. Thanks Sharylin for help in the basics and I do think I like this necklace just fine:)) 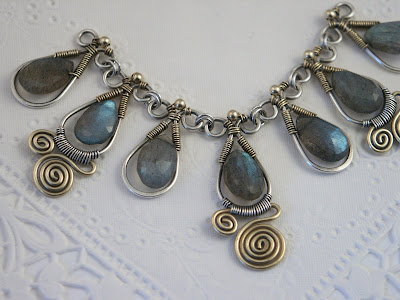 And on a final note, Brass, which had been permanently banished from my workbench forever, wormed its way back into my good graces and even found a home on a high end piece - Sheesh!!

Posted by BrassyBeads at 1:43 PM