I've spent most of the week making jewelry rather than taking pictures for the Step-By-Step tutorial I have been contracted to do. I delayed it due to worry if my nails were looking nicely trimmed and my hands clean enough for pictures.

I delayed it because my tripod is old and wobbly and I wasn't sure it was up to the job of being steady without hand support. I've decided to fix this problem of the feet sliding by taping them:)

No more delay! I'm going to go do the first part of it!

But all of this running away from and delaying 'work' has produced some interesting rings this week:)

I am wondering if I would have been so productive without a feeling that there was a monkey on my back. 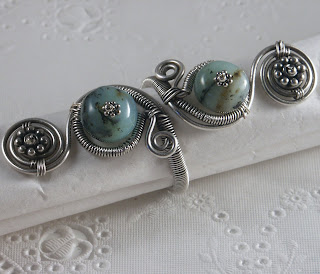