My monster project is coming along. Many design changes occurred during it's making. One change required me to unexpectedly heat up the end of a copper wire into a ball to finish the wire. Than I carelessly tossed the component into the pickle to remove the black fire scale, which destroyed half a strand of the most beautiful gemstone quality rhodochrosite I have ever seen.

I had to use up the other half strand to make an entirely new component, however, more design changes ensued and the new component turned out even better than the first one.

Putting that many hours into one project makes me worry about losing site of the original idea. Sometimes I did not know if I was making a hideous monster from hell, or something cool and new.

It's almost done now and I have decided that I like it and that it is more 'cool and new' than monster like. It's interesting if nothing else. I also decided that I will submit this copper project to the Copper Wire Jeweler's magazine for possible use in their second issue. http://copperwirejewelers.ning.com/profiles/blog/show?id=3516845%3ABlogPost%3A4795

The deadline for submission is March 8 (you still have time if you want to submit something) and I will be done by then. Than I decided that I would give the honor of being the first to publish this piece to the magazine if it is accepted.

Now I feel a bit guilty to my blog readers for talking about this piece and than holding out on you all. I will tell you that it has a ton of basketweaving in it! And of course if they don't want it, I will post it here for all to see.

So for now I only have a bone to throw to my blog readers. I dug up this picture from 2008. It is the second design I ever did using this same basketweaving. I gave it to my daughter for her birthday that year. 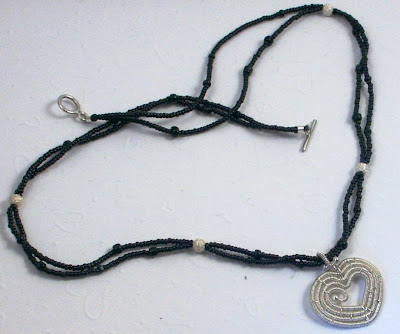 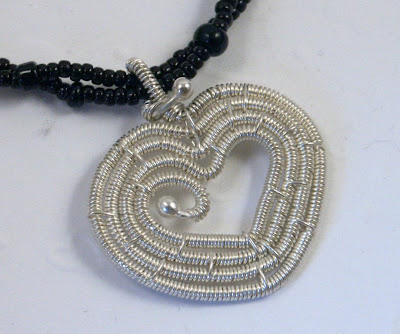 Posted by BrassyBeads at 8:46 AM